You have been compromised. Imagine you walk into your office in the morning and are greeted by this. All you know is something bad has happened and at that moment, you might have lost everything. This is not a place you want to be. And trust us, we never want you to be there either. Sure, we could make a little money in removing malware from your computer, but we want your money to be spent moving you forward, not getting you back to the starting line.

Unfortunately, malware is pretty widespread. Back in 2013, reports estimated that 30% of all computers in the United States were infected with malware. Jump forward to 2016 and Malwarebytes estimates that almost half of the businesses within the United States were compromised by malware throughout the year. With numbers this impressive, how do end users and businesses alike stand a chance at protecting themselves? Actually, the answer is pretty simple: it’s all about knowing what to look for. But before we get into that, we need to talk a little bit about the different types of malware and which pieces we are looking at within this Article.

Malware is actually a fairly encompassing word in that is stands for malicious software. When we talk about malware, we are referring to more of the adware/spyware areas but it actually includes a bit more than this. The first four areas of malware we’ll mention are

1: Viruses
Like a biologic virus, computer viruses try to replicate themselves within files and spread across a computer or network. Viruses can seek to destroy, steal, or control data.

2: Trojans
Remember the story of the Trojan horse? Same concept. A Trojan tricks you into thinking it’s something you want. When you install it, it delivers a “payload” into your computer from a backdoor to a keylogger, to anything else desired by the creator.

3: Worms
Tiny programs which continually replicate themselves and spread through a network. They differ from viruses in that they create spaces for themselves rather than hide inside existing files. Sometimes they are designed to destroy files while other times they are only designed to spread. For an amusing read, look at the Morris Worm, released entirely by accident but still one of the most devastating worms created.

4: Rootkits
Nasty software package that buries itself deep within your computer and often isn’t detectable by normal means.  Rootkits can simply monitor what you are doing or can go further and actually use your computer to quietly perform actions in the background (for instance, mass emailing to try and spread the rootkit to others).

5: Keyloggers
They are as the name suggests: a program designed to record everything you type, which is then sent to a remote person for your passwords and information to be harvested.


We won’t go into great detail avoiding these types of malware. The simple fact here is that a good antivirus program will take care of these for you. To this end, we recommend Trend Micro or Bitdefender. Both do amazing jobs at preventing these forms of malware from hurting you and removing them if you are already infected. Though we will say this: a little common sense goes a long way. All forms of malware make you think you want them for some reason. If something is free or suspicious, take a second look to make sure it’s safe. Otherwise, you might end up compromised.  And remember, we’re always a call away.

…a little common sense goes a long way. All forms of malware make you think you want them for some reason. If something is free or suspicious, take a second look to make sure it’s safe.

Two areas of malware remain and these are by far either the easiest or hardest to prevent depending on your perspective. For an end user, this is a very simple matter. For a network admin, it can be a nightmare. We’ll look into why in a second. For now, a quick look at the remaining types of malware:

1: Greyware
This is a broad term which includes adware, spyware, pup’s (potentially unwanted programs) and the like. Most often, these come bundled with other programs which are free. This area of software forces ads on you, spies on your computer usage, consumes system resources (some bring your computer to a dead halt), and/or stops things from working.

2: Ransomware
Due to the increase in this guy, you are probably aware of what it does already. Basically, it encrypts all of your files and holds them for ransom, demanding an “untraceable” payment for the key to decrypt your files. Even after paying, you may or may not get the key. Either way, bad idea. Give us a shot at decrypting your files or restore them from a clean backup. NEVER pay.

So that’s what they are. Why are they a simple thing to prevent for end users but nightmare for network admins? Simple: they start at the end user and often don’t really require administrative credentials. Part of the reason, and a question we get a lot, is because it is generally thought that antivirus will stop all forms of malware. Unfortunately, these forms have permission from the user to be installed (even if not intended), so antivirus sits back and says “well, I guess they actually want it” and leaves the malware alone. These programs trick the end user into thinking they are needed or safe and then start wreaking havoc. If you do happen to have admin rights on your account (or it’s just your personal computer), the malware becomes that much worse to deal with. But like we said, these things are pretty easy to deal with. Here’s how. (Images below can be clicked on for larger views.) 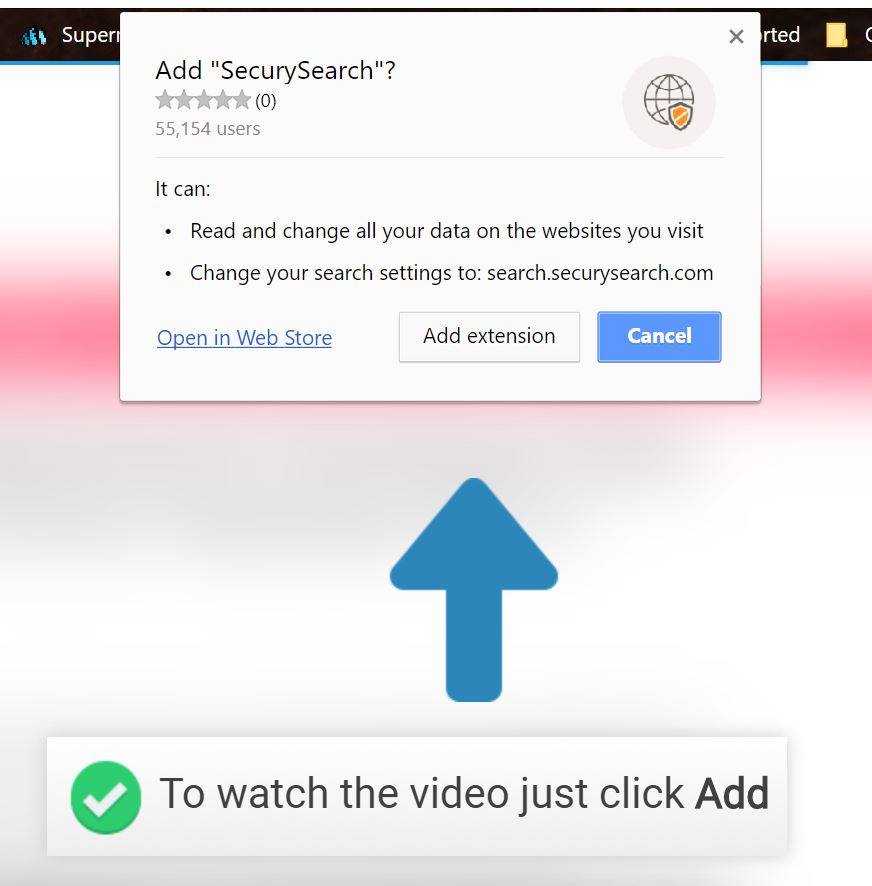 Is a website telling you that you need an extension, activeX controller, java, etc in order for something to function? 99% of the time, you just found a SCAM. Click that button and you’ve got malware. Maybe it’s just a little thing that’s going to force a few ads your way. Maybe you just lost all control of your computer and your files are gone. Don’t trust any websites unless you 100% know they are legitimate (your bank for example). If something says you need a Java or Adobe update, go to java.com or adobe.com to get it. If that website still says you need the update, it is a lie and a scam! 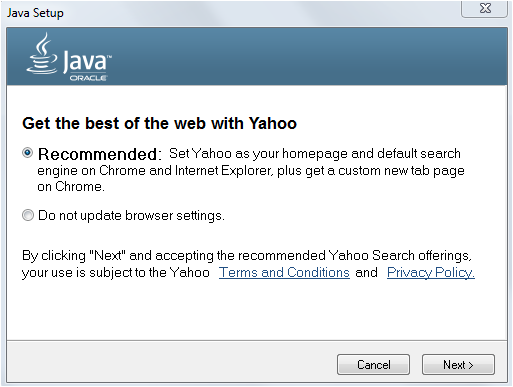 Speaking of Java and Adobe, both of them come with optional malware as well. For Java, DO NOT use the “recommended” settings and for Adobe Reader, be sure to uncheck all the extra boxes. 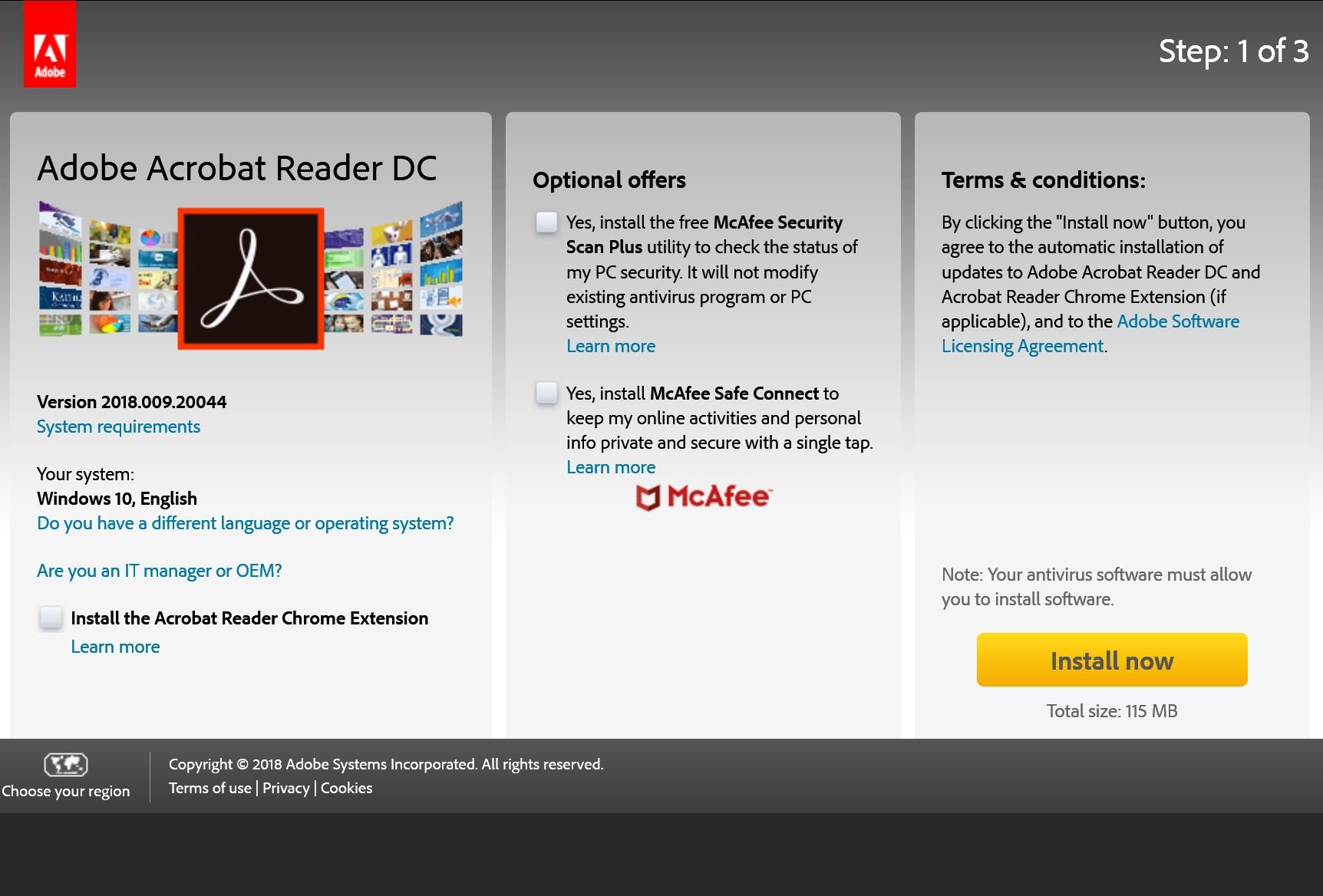 As mentioned earlier, malware loves to come bundled with free programs. The previous example shows this but sometimes it’s hidden in the install. When you install a free program, always watch what you are clicking “next” for. Are you telling the program you want it to install or are you agreeing to install a bunch of malware? Watch for checkboxes. A lot of them are “I agree to install xxxxxx too” and show up as already checked off. Be sure to uncheck those boxes! We’ll use and older install image from Java again since we have that on hand but most free programs try to bundle extra software into the install. HP Printers are also especially bad for this. All you really need is the driver. Any “improvement studies” are just spyware to collect information on you. Always be careful. 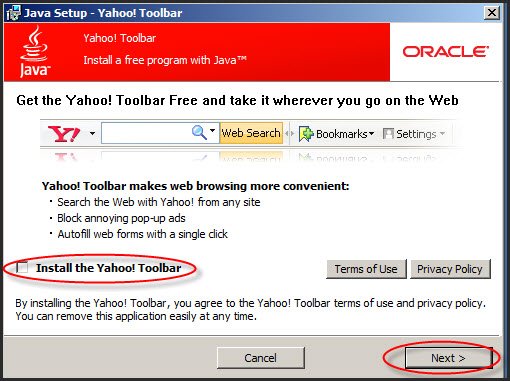 You may dislike us for this one but we need to let you know that Santa Claus isn’t actually real and that not every Nigerian prince who emails you wants to make you rich. Though in retrospect, “Nigerian princes” are actually just trying to get you to send them money so maybe not the best example. But: not every email you get is a good email. Did you know it’s actually really easy to change the “from” name/address to look like something else? If your good friend Paul sends you an email with the subject “look at this” and a single link, that’s pretty suspicious. We all know the real Paul is just trying to break computers so he can keep paying his staff (see how long it takes him to read this

), but you really don’t want to click that link. Other versions of fake emails include infected attachments and fake web links. If you get a random email with an attachment that you weren’t expecting, don’t open it. Especially if you don’t know who sent it! You can always call the sender and make sure that they did indeed want to attach whatever file before opening anything. And for web links, they are really easy to fake. If you don’t believe us, click on this link for www.yahoo.com and tell us how your google search for cats went. Good news: these are also very easy to detect. Mouse over a link in an email and you can see where it goes to. Check out the picture below for one of these fake emails. Jeremy “won” a Marriott stay but when we mouse over the link, we can see it has nothing to do with Marriott. 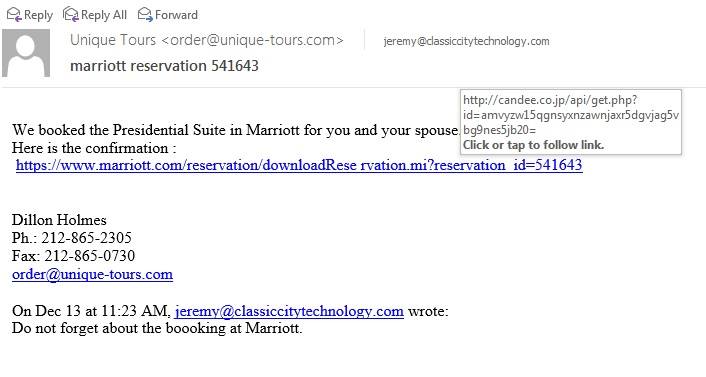 We keep saying it, but remember, we really are only a call away. Did you get an email you aren’t sure about? Forward it to us and ask if it’s safe. Not sure about a program or website prompt? Call us and ask. That 5 minute phone call is free. The amount of time required to fix the problem if it wasn’t safe isn’t. It’s like we said earlier, we do not want to see anyone infected. We truly would rather see that money going towards somehow improving your computer experience. Technology is nothing but trouble when it isn’t working correctly. It is truly great when it does what it is supposed to. But when it exceeds your expectations? That’s where the magic is. Be watchful to keep out the malware and let show you technology that exceeds expectation.

What Does Antivirus Do?